Chasing the King of Hearts by Hanna Krall 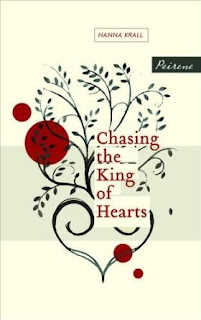 In the Warsaw Ghetto, in 1942, Jewish couple Izolda and Shayek are trying to make the best of things but realise that worse is coming. Instead of sitting things out and hoping for the best, as so many around them seem to do, Izolda decides they need to take action - even if they can only save themselves. She works out how to get out of the Ghetto, changes her name, dyes her hair and attempts to pass for a Pole. At first they seem lucky, but ill-fortune catches up with them and they are separated. Arrested an amazing number of times, travelling across most of Eastern Europe, Izolda never stops trying to find Shayek. Will she find her King of Hearts and live happily ever after?

Chasing the King of Hearts is an amazing account of a young woman's persistence and determination against the might of the German invaders and the horrors of the Holocaust. The obstacles that she overcomes would have most of us giving up hope at the beginning!
It's very straightforward in its story-telling, which works both for and against it. Its style captures Izolda's focussed determination, a feeling that if she allowed herself time to stop and think about the situation or be afraid, she'd never be able to pick up the impetus or find the energy to carry on. On the down side, I felt it revealed all at the first read - making it compelling but I didn't feel it to be the sort of novel that I'd read over and over again.

Buy Chasing the King of Hearts

from Amazon
Posted by maryom at 10:02