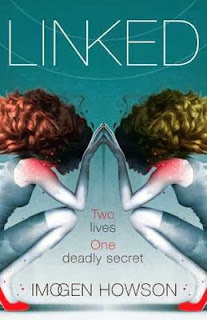 As long as she can remember, Elissa has suffered from distressing hallucinations in which she feels she's seeing the world through someone else's eyes - a world which is full of white masks, machines, wires and above all, pain. Doctors have tried to help in various ways but things have only got worse. Now as a last resort, an operation is being planned which will remove part of Elissa's brain. But at almost the last minute, she discovers that she actually IS seeing through someone else's eyes - those of Lin, the twin she never knew she had but has always been linked to telepathically. Together they try to outrun the people who have subjected Lin to years of scientific abuse - and uncover a secret agenda that the government will kill to protect.

Linked is an exciting, fast-paced, sci-fi, conspiracy theory read - and just in case that doesn't tick all the boxes for you, there's a little romance as well. This book had been sitting on my TBR pile for quite a while with me vaguely thinking I'd get round to reading it sometime - and I SO wish I'd picked it up sooner. The premise of twins separated at birth but still telepathically linked had me intrigued - especially with the hint of government secrets and cover-ups - but I hadn't imagined it would be as compelling as I found it. It's the kind of book that draws you in instantly and doesn't let you go till the very end. I was a little worried when I saw an advert for a sequel, but it's a perfectly rounded-off stand alone novel.
Although set on strange planets with interstellar travel, it isn't about aliens from outer space but is primarily a conspiracy-theory  thriller about the horrors that one sector of society will inflict on another in the name of scientific advancement. It's aimed at teens and young adults, but I feel it could appeal to many older readers too.

from Amazon
Posted by maryom at 09:57