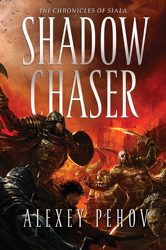 Better and Better
Review by The Mole

Shadow Chaser is book 2 of The Chronicles of Siala. Shadow Prowler was book one.

The plot in this book is fast moving and full of short but significant events. Without giving some of them it is difficult to do justice to this wonderful episode in the Siala chronicles. But to give them would be to give plot spoilers - so I can't!

Let us say that this part of the story is much faster and action packed than the first book. Pehov has really stepped the pace up and we start to learn more about the "Shadow Dancer", as Kli-Kli insists Harold's true name is.

Pehov is also one of those strange authors that believes almost no character is immortal and is happy to kill them off. In book 1 we lost 1 character, who is still mourned in book 2 but we also lose X character(s)  in this book. Character(s) that should not have died!!

In the first book I was not too sure about some of the translation by Andrew Bromfield but in this book he has learned the language of fantasy and excelled himself in a wonderful translation that brings Pehov's excitement through.

All in all this book truly excels in comparison with book 1, which was already a very good book. If this repeats itself in book 3 then... well it just can't get any better. Can it?