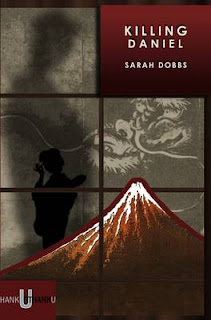 Chinatsu is Japanese, Fleur is English but for a brief period in childhood they were the closest of friends. They planned an ideal future for themselves but somehow life got in the way of it. Fleur, still living in her Northern home-town, is tied to an abusive partner and haunted by the past and the possibilities of what might have been if her friend Daniel hadn't been killed. Chinatsu now lives in Japan, trapped in a marriage that has more resemblance to a business deal than a romance.

Killing Daniel is a disturbing, sometimes brutal story, of two young women caught in dysfunctional relationships. It was actually less of a thriller than I'd been expecting. There are incidents from the past that need to be faced up to, things that must be brought into the light of day before Fleur and Chinatsu can move on and the story does move towards a gripping violent denouement but it's equally about self-determinism and female friendships. Dobbs creates complex characters in whom the reader can believe and whose pain the reader shares.

Killing Daniel is a thought-provoking debut novel from Sarah Dobbs and I look forward to reading more from her.

from Amazon on pre-order until November 2012
Posted by maryom at 10:37