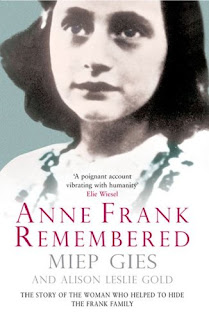 I have to put my hand up and admit that I have never read anything about Anne Frank before. This was a positive and personal choice. My mother was born of Jewish parents and converted to Christianity at a time my grandfather felt it worthy of the comment that it would not save her from the Nazis. Because of this I have always been afraid to pursue the subject but fully aware of the horrors to which the Jewish people were subjected. It must also be remembered that of the 11 million slaughtered in the holocaust, 5 million were not Jewish but books like the diary of Anne Frank leave people thinking that only the Jewish people were targeted.

However that is all on the macro level, this book deals on the micro level and as Miep Gies points out, she was one of a whole army of people who put their lives at risk to help a few people to survive the war, although, as in the case of the Franks, not always with success.

I did enjoy the book and found it interesting in many ways. It is easy to consider the terror of the people being hidden and pursued, but the terror of those who assisted and protected them, knowing that discovery was likely to mean their own death, is easy to ignore. Miep tries to portray that daily terror to the reader and further to explain the lengths they had to go to keep their charges fed and healthy. Is it well written? Well I must say no, but it is honestly written and the afterword of this edition does not read anything like the main body. I believe this is because the afterword was paraphrased from the musings of the 100 year old Miep.

Miep didn't see herself as brave but would I have done the same? As a single man I would like to think I would but as a married man with children I know I wouldn't, although many thousands of individuals across Europe did exhibit such bravery to protect individuals from persecution and death. I take my hat off to all of them and thank Miep for showing me a little of the lengths such people had to go to.

Will I now read the diary? Well I am more likely to, but not yet.
Posted by The Mole at 22:34 No comments: 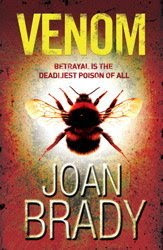 This book left me very surprised. We meet Helen Freyl who I take an instant dislike to. We also meet David Marion who is less than a pleasant character however I find myself still reading. I could not understand why. Had the publishers put glue on the cover? No but for some reason I find myself drawn back to it constantly.

The story starts violently and despite Helen's early unawareness of the danger she is in, the reader is aware and wonders why. I found myself wanting to say "Why don't they all meet up in a meeting room and drum out a deal? There's no need for this intrigue and danger." Two thirds of the way through I had this book down as three stars but then we START to find out why the friendly chat wouldn't have worked. It is very late on before we find out all the reasons and it is worth the wait. I ended up on four stars because it was gripping and held my attention throughout. I would still say that I don't like Helen or David but that means they aren't flat characters if I can dislike them.

David Marion, an ex-con receives a phone call warning him of a contract killer out to kill him. David attacks and kills the killer without a moments concern and destroys his house to make it look like his own death. This has happened because of a corporation called UCAI. Helen then is offered a fellowship to a medical foundation that is backed by UCAI and the intrigue starts.

There is a romantic link between Helen and David which I found difficult to believe in or accept, so don't read it for the romance, but as a thriller it is well worth reading. It is fast moving and well written and I would recommend this to any thriller fans.
Posted by The Mole at 21:07 No comments:

The Thirteen Curses by Michelle Harrison * * * * 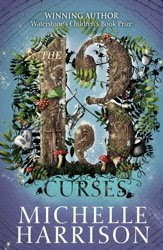 The Thirteen Curses is a story of what happens when our world and fairy land come together. But this isn't the Fairyland of gossamer winged beings granting human wishes, rather one where the fairies are more like pixies or even goblins, teasing and tricking people, stealing human children and replacing them with their own. Rowan's brother has been taken by the fairies, to free him she must find the 13 missing charms of an enchanted bracelet, which were once treasures but have now become curses - the Dagger, which opens old wounds, the Key which opens the world of the dead, the Goblet of eternal life which can now trap someone forever in childhood, the ever-refilling Platter from which you could now eat yourself to death- and the longer they remain seperated from the bracelet, the stronger their powers become.As Rowan and her friends search for these charms, she also finds herself discovering the truth about her life, her parents and why her brother has been taken.
This is the sequel to the Thirteen Treasures and the beginning of the book is slightly hampered by trying to make sure that new readers are filled in on the plot so far but soon the reader is caught up in the story as unsuspecting people are caught up in the fairies dance and dragged away to their realm. It's a compelling, page-turning read of fairies meddling in humans' lives, a sister's desperate quest to be re-united with her brother and the discovery that things are not always as they seem. As it neared the end, I found I couldn't put the book down!
Posted by maryom at 23:55 1 comment:

I very nearly didn't read this book. Why? Well it starts by setting the physical scene and the reader is bombarded by American trees, birds, plants, cars and geographical terms that are unknown to the British reader. I thought about reading it and googling each one which would have been a very time consuming job or to just let it wash as wallpaper. I opted for the wallpaper route and am pleased I did.

It is written in what I found to be an unusual style in that we kept switching characters with each chapter, sometimes with time overlap, sometimes as a continuation of the timeline. The story is essentially about two young adults and a mistake they commit that has them at odds with the law. As we switch characters we see the ripple effect of their action through friends, relatives and friends of relatives.

Since the death of his mother and his sister leaving home, Isaac has stayed at home to look after his crippled father. Somewhat a genius he has denied himself a university education and has finally decided to leave and get that education. He steals money from his father and runs away deciding to hitch and hop trains to get there. He decides to start the trip with his friend Poe for company. They come across some down and outs who get heavy with them and Isaac murders one of them.

I found another aspect of my reading it unusual. I wouldn't say I didn't care about the outcome, more that I felt the outcome wasn't important, I wanted to see justice served. It was also nice to come across a story where the loose ends weren't tidied up conveniently - a lot like real life. Even now I am not sure if that justice was truly served.

This was a highly compelling read and I STRONGLY recommend this read. Why not 5 stars? Well although I really enjoyed it I have read a few books that moved me more - but not many.
Posted by The Mole at 19:39 2 comments: