Becoming Someone by Anne Goodwin 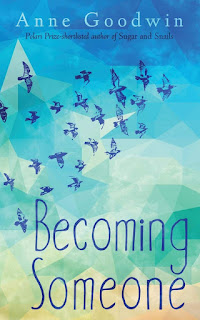 I know Anne Goodwin primarily from her two novels - Sugar and Snails, and Underneath, but she's also a prolific writer of short stories. Now, together with publisher Inspired Quill, she's brought together forty-two stories, written between 2004 and 2018, many of them previously published in literary magazines and websites.


To call these stories 'psychological studies' might not be quite accurate, but it's close. In a multitude of scenarios, Goodwin examines how we become ourselves - straining to conform to what family or society expects, rejecting the opinions of others, finding a path for ourselves. All of them share Anne Goodwin's perceptive, sympathetic insights.

The collection is divided into six sections - Stranded in the Dark, No Through Road, No Way Back, Spinning Signposts, Forging a New Path, Into the Light - and, as you might guess from their headings, as you progress through the book the stories become more hopeful, the characters more determined to create the life and identity THEY want, not endure that forced on them by parents, friends, society. The characters - from a young single mum to a dying grandfather - try to reconcile the idea of what they should be with what they are. Some take refuge in an imaginary world. The lucky few refuse to accept society's image of how they should behave and feel, and create an identity to suit themselves. 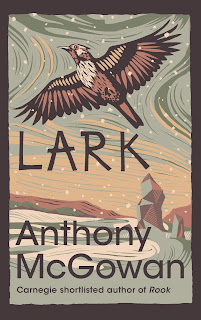 It's years since Nicky and Kenny last saw their mum, but now she's on her way to visit, arriving by plane any day soon. She left when they were young, and a lot has changed since, so while they're hyped up at the prospect of her coming home, Nicky, in particular, is partly dreading her arrival too. To fill the waiting, the boys decide to head off to the moors, just like their dad used to in the days before computers and video games. It'll be fun, a lark. They might even see one (a lark, that is), singing as it rises into the sky.
But things go wrong ...
The weather turns from dull to sleet to snowstorm, and Kenny and Nicky find themselves cold, hungry and possibly lost. A short cut seems like a good idea, but isn't, and the boys find themselves in a situation that's getting worse by the minute.

Lark is the fourth, and last, story following the adventures of Nicky and Kenny, and what an end to the series it is! Presented in a font and format to encourage reluctant, struggling or dyslexic readers, Lark is a nail-biting, heart-pounding, poignant read suitable for any young teenager. It's a story in which to lose yourself, to feel you're there on the moors, lost, wet and starting to be terrified, fearing, along with Nicky, how, and if, he's going to get out of this latest scrape. (I imagine that afterwards a lot of readers will be all 'I'd never have done anything so stupid. I'd have got us safely home, no problem' but don't disrupt them in the middle)
The story is told from Nicky's point of view and McGowan gets inside his mind in a way that makes you feel he clearly remembers being a teenager - messing about with mates, getting dumped by his girlfriend, hastily disguising his rude drawings - and, away from the danger, it's funny, especially in an appealing-to-teen-boys way (though I laughed regardless of who it's aimed at).  At the same time there's a great sense of family and belonging running throughout, a sense there's a bond between the two brothers that nothing could break.


If you haven't met Nicky and Kenny before it doesn't really matter, their story-so-far is filled in enough for you to read Lark, and without spoilers for the previous books. But if you'd like to read their story in full the first three novellas have been collected in one volume 'The Truth of Things'.

For once, I've managed to restrict myself to ten for my 'best of the year' list - all, in their own way, absolutely brilliant ...

Take Nothing With You - Patrick Gale (Tinder Press) - in his fifties, when he thought he was past the age of being surprised, Eustace finds himself falling in love with a man he meets on the internet, and diagnosed with a potentially life-threatening condition. Undergoing long solitary hours of hospital treatment he looks back over his life - the fumbling sexual misadventures of his teenage years, and his escape from a dull, repressive home life through music. Gale's writing is engrossing, intelligent, and compelling.

Missing - Alison Moore (Salt Publishing) How to quickly sum up a novel by Alison Moore? Not easy without giving away too much plot. Jessie Noon lives a solitary life, cut off from neighbours, friends and family. The story follows her trying to start up a new relationship, and fix the gap that has grown between her and her family. On the surface, little seems to happen; beneath it, everything does. Moore is wonderful at playing with words, at building atmosphere, and at creating characters that linger long after the final page.

Home Fire - Kamila Shamsie (Bloomsbury) a book club read which absolutely stunned me. In this story of love, politics, family ties and radicalization, Kamila Shamsie brings Sophocles' Antigone bang up to date, setting it in present day London, where Aneeka finds herself torn between loyalty to her twin brother Parvaiz (despite his extreme beliefs) and her lover, Eamonn, son of the Muslim Home Secretary. I read hoping for a happy ending, but not even today is there an easy way out of this dilemma.

Shadows on the Tundra by Dalia Grinkeviciute (Peirene) Based on actual events, this book is a gripping, moving account of the fate of Lithuanians forcibly moved from their homes during WW2 and 're-settled' in Siberia, in inhumane conditions with inadequate food or shelter. Blurring the lines between fact and fiction, Dalia Grinkeviciute's account doesn't ask for sympathy, but faces the situation head on, doing whatever she needs to to survive.

From a Low and Quiet Sea by Donal Ryan (Doubleday) Three very different men, whose lives are linked in only the slightest of ways, but for whom sorrow has crept up unexpectedly and engulfed them. Donal Ryan always has an amazing way with words, enabling the reader to walk in someone else's shoes for a short time, to experience their fears and hopes, and maybe find sympathy for them.

In Our Mad and Furious City by Guy Gunaratne (Tinder Press) A gripping portrayal of life on a run-down, inner-London estate, of the precarious balance between hope and despair in which its inhabitants live. It follows 48 hours in the lives of three teenage friends from different backgrounds, as outside events kick off riots and change these boys' lives forever. The writing is pacy, and 'in your face', capturing 'street-talk' in a way that feels natural and unforced. It's hard to believe this is a debut novel.

The Truth about Archie and Pye: a mathematical mystery  by Jonathan Pinnock (Farrago) - an off-beat, quirky thriller. After a chance encounter on a train, Tom Winscombe finds himself in possession of a case full of mathematical equations that everyone (including the Belorussian mafia) seems to want, and they're not afraid to kill anyone standing in the way. It's fast-paced, funny, and you don't need to know anything about maths to enjoy it.

Elsewhere, Home by Leila Aboulela (Telegram) - a moving, thought-provoking collection of short stories dealing with the search for 'home' and the difficulties of migrants caught between two places that answer to that description, between the heat and vibrancy of Cairo or Khartoum and the dull, damp streets of Aberdeen or London, or, conversely, the old-fashioned, limited world of Africa and the modern, opportunity-filled one of Europe. Having chosen to leave, though, home can't really be returned to.

Shatila Stories edited by Meike Ziervogel - an ambitious project from the founder of Peirene Press, in which she and London-base Syrian editor Suhir Helal travelled to Beirut, to the Shatila settlement created for Palestinian refugees, and worked with hopeful, enthusiastic, but inexperienced, writers from the camp itself to develop the stories that go into this collection. Again a book that lets the reader into the lives of the people so often dismissed as mere 'numbers' in a news report.

Once Upon a River by Diane Setterfield (Doubleday) This last choice is a sneaky inclusion, as it's currently only available in the UK as an e-book, and won't be available as a hardback till January 17th. It was too good to be made to wait a whole year though. It's a masterpiece of story-telling concerning a girl pulled out of the river Thames. Assumed to be dead, she miraculously comes back to life but then the search is on for her family - with several people claiming her as theirs she becomes the centre of a 'tug of love'.
Posted by maryom at 19:39 No comments: