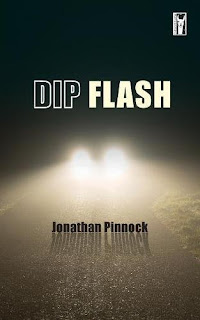 Welcome to the weird, wonderful world of Jonathan Pinnock.  It's a world where ventriloquist's dummies come to life, your wife might run off with a porpoise, or morph into a cat, and if your granny's becoming too expensive to keep, there's a way to release her equity. But you'd better hold on tight to your memories - if they start to disappear, then so will so much more...

Jonathan Pinnock's latest collection of stories is like a montage of strange dreams you might have after too much cheese (there's a story about that as well!). From short, hilarious anecdotes to longer tales that will twist your mind, they're stories to amuse, intrigue and occasionally terrify you ('Teamwork' was horrifically claustrophobic for me).

I've puzzled over how to categorise this collection, and to be honest given up. Reading them is like seeing the world reflected in the fairground Hall of Mirrors - recognisable but a little warped. Sci-fi or fantasy might apply as a label for some, but by no means all. My favourites - Adagio Assai, and The Picture of Mrs Tandogan - aren't that at all, but stories of people like you and me, striving for something perfect in life, or stumbling through it without paying the slightest bit of attention. All in all, an interesting set of stories, thought-provoking, funny, and/or scary; good, I'd suggest for watchers of 'Black Mirror'.

Pirates of Poseidon by Saviour Pirotta 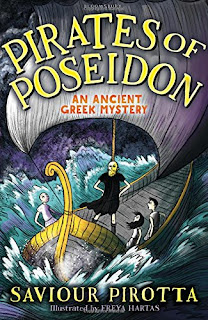 Following a disastrous performance of his first-ever play, the poet Ariston has decided to leave Corinth, and take up a position as tutor on the island of Aegina, where no one knows him. Travelling with him, of course, are Thrax, his personal slave, and Nico, his scribe, and where those two boys go, adventure is sure to follow!
A valuable ring has gone missing, and Thrax believes he can track it down, but when the trail leads the boys into the clutches of pirates you begin to wonder if this time, he and Nico have taken on too much...

Pirates of Poseidon is the third book in this excellent children's detective series set in Ancient Greece (but it doesn't matter if you haven't read the first two). Thrax and Nico work for the pompous, smug poet and singer Ariston; Thrax is a slave, attending to his master's clothes and running errands, and hoping one day to buy his freedom; Nico is free-born and works as a scribe, writing down verses and lyrics for Ariston, but life is pretty much the same for them, at their master's back and call most hours of the day.  Both boys have a 'nose' for solving crime and generally succeed in solving a mystery where their elders fail. Thrax is the 'detective' of the pair, uncovering clues, and following leads, while Nico follows along, acting as a sounding-box for Thrax's theories, and recording their adventures.
The story is fun and exciting, with a touch of danger, making it a compelling read, and along the way there's a lot to be learned about Ancient Greece - possibly without the reader even realising it! From a parent's or teacher's point of view this is the beauty of this series; children will be absorbed in the story - trying to guess the villain ahead of Thrax and Nico, laughing at the antics of their master, unable to bear putting the book down when the boys get into danger - but at the same time they're picking up lots of information about the Ancient Greeks - how they dressed, what they ate, what they did for fun. There are some perhaps confusing words, such as references to gods or everyday Greek objects, but the glossary explains them all. (A cunning tip for parents - read the glossary before your child reads the book, then you can appear an expert on everything about Ancient Greece :) )
This is a series I can't wait to share with my grandson when he's older, and I hope Thrax and Nico will have had many more adventures before then.

From a Low and Quiet Sea by Donal Ryan 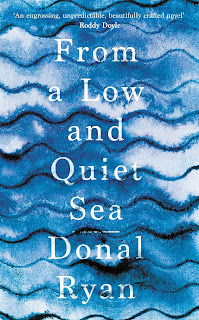 Donal Ryan's latest book tells the stories of three very different men, whose lives are joined in only the slightest of ways, but who share the pain and scars of grief; Farouk, persuaded to leave his war-torn homeland, and risk all on a journey west; broken-hearted Lampy, who dreams big but achieves little; and unscrupulous accountant/lobbyist John, who, finding death drawing close, seeks forgiveness from a God he claims not to believe in. For all of them sorrow has crept up unawares, like the Normans sailing 'from a low and quiet sea' to engulf Ireland, and overwhelmed them.

The first three sections read as totally unrelated stories, but the last ties them together - not an unusual format, and you are half-expecting it to happen, but, the pulling together and tying off of separate threads is done with style and doesn't feel in any way contrived.
I've always found Donal Ryan to have an amazing way with words, allowing the reader for a short space of time, to walk in someone else's shoes, to experience their hopes and losses, and in this sympathetic, but not sentimental, study of grief  he does it again. He frequently seems drawn towards fractured, broken people in his work (or maybe it's just that, as with Tolstoy's happy marriages,  happy people are all the same and don't have much of a story to tell), and that's how most of the characters in this seem. The loss of home and family, the pain of heartbreak, regret for past actions and a need to confess - these don't seem cheery topics for a book, but the characters seem to be heading towards some level of resolution, a glimpse of hope and happiness, or maybe just acceptance, lying ahead until ...  As with Ryan's first novel, The Thing About December, the bodyblow shock is kept till the end. Surprising, appalling. I found myself backtracking and changing my estimation of those involved - and Ryan's skill is shown in that, by now, these were 'people' not 'characters'. 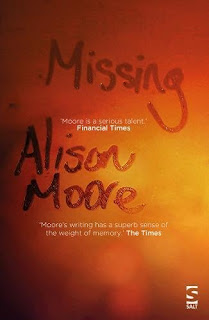 Alison Moore's latest little gem (less than 200 pages) follows Jessie Noon for a few weeks in winter - from late November to the start of January - as she goes about her life in the Scottish Borders town of Hawick. It's a life which feels strangely cut off and isolated, from neighbours, friends and family. For the past year she's been living alone with just a cat and a bizarrely named dog for company, after her (second) husband walked out one morning leaving a parting message in the steam on the bathroom mirror. As the story progresses, Jessie starts up a new relationship, tries to get in touch with her grown-up son, who she hasn't heard from in years, and to improve her relationship with her parents and elder sister, but something is missing. She's haunted and weighed down by a dreadful event from her past, which leaves her wandering around in a fog - able to concentrate on the tiny, mundane everyday things immediately around her but unable to see a bigger picture.

Jessie's story unfolds in two ways. As we follow her day to day (frankly quite dull) routine, Jessie slips, stream of consciousness-like, into random reminiscences brought about by the things she sees. These chapters are interspersed by sections set back in 1985, as events move relentlessly towards the tragedy which has shadowed Jessie and her family since.

The writing is wordy in the way that Moore's books often are - not in length but in playing with meanings. The power of words is central to the tale; a misunderstood instruction led to the dreadful event which plagues Jessie's life - ironic as she's a translator by trade, and spends hours, if not days, mulling over the subtle meanings of words, trying to find an exact English match for each one.
So I found myself, of course, thinking about 'missing' and all its various forms - a missing person, missing someone who's no longer in your life, missing your bus, missing your step, missing a turning, a near miss, or just missing out on life, as Jessie is. Her life has been irrevocably changed by a child going missing, and other people disappear from her life with seeming regularity, but smaller things also get lost - a jigsaw piece, items of jewellery, a jar of marmalade - and perhaps the finding of them towards the book's end marks a turning point in Jessie's life.
There's also a feel of things and people being in limbo - waiting for some dramatic revelation or event to give meaning and purpose to them.

In part, it's a book in which little seems to happen but beneath that superficial appearance so much does. Moore's words hold the reader, building atmosphere and emotion, but then in a tender, heart-warming or -breaking moment there'll be a burst of unexpected humour to flip the mood around.
It may be short, but has plenty to get your (literary) teeth into and certainly left me with plenty to mull over.