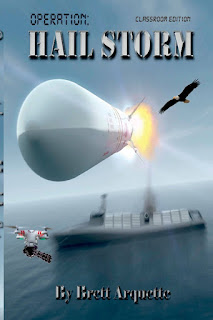 "Marshall Hail was a husband, a father, a Physics Nobel prize winner and industrial billionaire. But when Hail's family was killed in a terrorist attack, he became a predator and redirected his vast industrial assets toward one goal"

As an industrialist he opts to build drones and a team to operate them, in order to direct his energies towards his revenge.

I found this to be very much a book of two parts. The first part felt like a game they were playing and it reminded me hugely of a comic book hero from about a thousand years ago. General Jumbo! In those days they weren't 'drones' but 'radio controlled toys'. General Jumbo would set the world to rights each week with the aid of his toys that were operated from a single controller work on one arm. How DID that work? 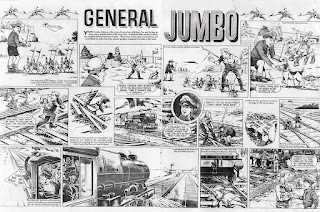 In the second part of the book the tone, tempo and voice changed and it became far more focused and less like a game. I started to feel more involved and less like a spectator as Hail and his team took on a far more volatile mission.

I would stress that I did enjoy both parts of the story although the change in the second part was very welcome.

This was book one and sets up a scenario where there could be any number of books to follow based on Hail and his crew.

If you are into high-tech thrillers then this is an ideal choice that I'm sure could make excellent TV one day when the series is more mature.

I was donated a Kindle review copy of this book which is self published on lulu.com

Genre - YA action thriller
Posted by The Mole at 10:50 No comments:

The Queen of Bloody Everything by Joanna Nadin 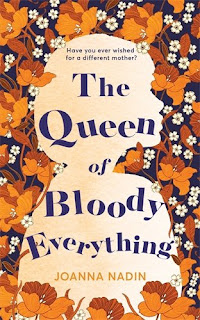 Edie is artistic, bohemian, slapdash. She doesn't care about her daughter's bedtimes, or homework being done, or about eating up your greens. You'd think she'd be the mother that children dreamed of having, but children always want what they don't have, and her daughter Dido longs for a 'normal' family - the perfect mum, dad, 2.4 children set up of glossy lifestyle magazines, but above all a mother who understands the importance of rules and routine in a child's life. Investigating the gate in the back fence of their new garden, Dido thinks she's stumbled into this paradise  - a ready-made family, the Trevelyans; Tom, his sister Harry, and their parents, Angela and David. It's love at first sight for a six year old. As the years pass, Dido's infatuation with the Trevelyans grows stronger, but even Eden had its problems, and Dido's little paradise has its share too.


The Queen of Bloody Everything is Joanna Nadin's first for a adult readership, beautifully written in a first person style which entices the reader in, and a moving look at a tumultuous mother/daughter relationship. With no father figure on the scene to share her love or anger, Dido's relationship with her mother is perhaps closer and more all-consuming than another child's might be, but at the same time she longs for what she sees as 'normal', imagining it to be better than what she has. Fundamentally though, Edie and Dido approach life and family in opposing ways; Edie has spent her life trying to escape the shackles of respectability and parental guidance; Dido craves them.

It's a story filled with nostalgia, particularly for the 70s and 80s, which seen through Dido's child-eyes are simpler, filled with love and the promise of a bright future. Dido's perfect world is based on wishful thinking and the Trevelyans aren't the perfect people she imagines, yet as she grows up and their flaws become apparent, Edie is the person who bears the brunt of Dido's disappointment, anger, and teenage tantrums.

I absolutely loved this book - its intimate, perceptive look at mother/daughter relationships, from the intensity of childhood to a more equal adult friendship, and its believable, attractive yet flawed characters. I'm hoping Joanna Nadin will be writing more adult novels! 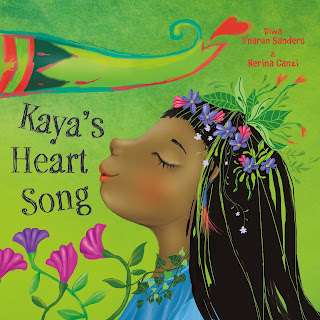 As Kaya's mama sits meditating, she hums a little song - her heart song. Kaya wants to join in, have her own song to sing, but, as most children are, is too impatient to sit quietly, so she goes off to play in the jungle.There, she finds a broken-down carousel, and, in bringing it back to life, finds her own heart song too.

Most children are noisy, rushing around playing, not wanting to sit quietly. In Kaya's Heart Song, author Diwa Tharan Sanders encourages them to seek out quiet time, to observe the world around them, and to get in touch with their emotions, while Nerina Canzi's jewel-bright illustrations bring Kaya's world magically to life.

Here today as part of the Kaya's Heart Song blog tour, we have author Diwa Tharan Sanders to tell us more.

"I feel honoured to be able to share my take on mindfulness and children but as I am by no means an expert on the topic, everything offered here has come from personal experience and through conversations with friends. Mindfulness has certainly become a popular topic with children and I hear more and more about schools integrating mindfulness into their curriculum, which sounds absolutely fantastic to me, how I wish I had had those lessons too.

So what is mindfulness? To me, it is being aware of the present moment and tuning inwards with a calm, quiet mind to a state of be-ing and releasing all thoughts of anything else but the now. One of the beautiful things about mindfulness is that in can happen anytime or anywhere, if we allow it to. You could be waiting for the bus, walking through a garden observing the flowers or engrossed doing something you love such as art, cooking, running or you could even be sitting in a busy restaurant waiting for a meal for a state of mindfulness to happen.

When it comes to children, the same mindfulness ‘principles’ apply. Give them the space to pause as it were and allow them to come into a place of quietness and calm. This can create a ripple of positivity for their well-being. I hear the term ‘instant gratification’ being passed around amongst my friends with children and it basically means children (and many adults too, to be fair) today don’t know how to wait. In this current technologically-laden world of instant messaging, ‘instant-gramming’, watching videos on demand and being able to communicate instantly at the touch of a button, we have forgotten the art of waiting. Of noticing and of just being. I personally think that extending time and space to children to simply be with themselves will cultivate more awareness, patience and other sorts of ‘magic’ such as creativity, self-expression and self-discovery. A very real example of this is the process in which I wrote Kaya’s Heart Song.

My inspiration for the story was to write about a little girl who wanted to be happy, because I felt (and still do) that we sometimes forget the importance of following our hearts by unconsciously drowning-out the voice of our hearts living our day-to-day lives the way we’re ‘supposed to’. Thinking about happy hearts, led to the idea of a heart song and it was in discovering my own heart song as I wrote the book, that the theme of mindfulness revealed itself. And so yes, Mama is right in saying, “If you have a heart song, anything is possible. Even magic!”

And it’s finding this magic that I think is the best thing about practising mindfulness. Give your child (and yourself!) space to take the time to feel and listen for the magic that’s in us all. It is found in many different forms: in new ideas, finding new emotions, expressing these emotions, in having the courage to speak up for what you want or love, in being creative and even in simply being happy and content in the moment. Whatever makes your heart sing is mindfulness working its magic.

Here are a couple suggestions of mindfulness practices to do with your child (thank you to my friends who willingly brainstormed some of these ideas with me):

1. The next time your child does something you badly want to discipline them for, be mindful about it. Calm yourself with 10 – 15 deep breaths before explaining to your child why they should take some time alone to be with themselves and think about what they did. Ask them how they feel after.

2. The next time your child asks for your smartphone or gadget to play with, offer them something else like a piece of paper, an empty box or nothing at all and watch what happens. Regardless of how they react, you’re creating a space for them to be with their emotions and essentially express themselves. This also opens their mind to thinking out-of-the-(electronic) box and stimulates their creativity.

3. Set aside joint ‘mindfulness time’, it could be a walk in the park to observe the trees, a colouring activity, sitting down to breathe together in meditation or silence or anything that feels like it would stimulate you and your child.

4. Listen to your heart song. Our hearts are often the truest barometers of how we’re feeling at any particular time. Make a conscious effort to tune in; ‘zoning-in’ instead of zoning-out and take the time to notice what’s going on inside. Sing, hum, whistle, speak, move, tap or drum whatever it is you hear. Self-expression has been for me one of the best ways to connect deeper to my own heart and to feel more mindful.

There are many advantages of practising mindfulness. For me, the most precious one is the love, honour and magic that we give to ourselves when we do so, because this is what then flows out into the world. Mindfulness starts inside, with us all and can be an amazing gift to unravel when we find the time to journey inward. Imagine how incredible it would feel to live amongst those who are creating and sharing magic every single day!"

Diwa is a yoga teacher, Breath of Bliss breathwork facilitator, and owns Tulamala, a brand that makes intuitively-designed mala necklaces and bracelets for healing, happiness and inspiration. Kaya's Heart Song is her first picture book

You can find Kaya's Heart Song here on Lantana Publishing's website
Posted by maryom at 08:44 No comments: