Mrs Darcy Versus The Aliens by Jonathan Pinnock 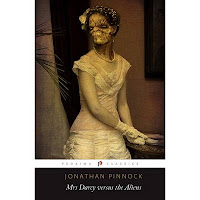 Austen - but not as you know it!
review by Maryom

A couple of years after the ending of Pride and Prejudice, the Darcy's have not yet produced an heir, the Bingleys are falling for every financial scam in the book, Mr Collins is saving fallen women in Whitechapel while his wife hangs out with pot-smoking Lord Byron and Lydia Wickham has been kidnapped by aliens. Wickham is hot on their trail with the help of his sister-in-law, Elizabeth Darcy, for whom the aliens have rather special plans...

As you might have guessed from the title, this is not an entirely serious novel. Certainly not one to compare with Miss Austen's original but it is an amazingly hilarious, laugh-a-minute comic read with references to almost every Pride and Prejudice TV or film adaptation and quick asides of anything from The Fast Show to Women In Love via James Bond.
Oh, and there are aliens - don't forget the aliens - or their squirming tentacles.

Mrs Darcy versus the Aliens is filled to the brim with my sort of humour - lots of in-jokes and obscure TV quotes that I needed to share with anyone who'd listen. I'd like to tell you about all the funny bits but would probably end up reading the book to you.

Not a book I'd recommend to Austen purists but for everyone else it's a 'must read'.