A House of Ghosts by W C Ryan 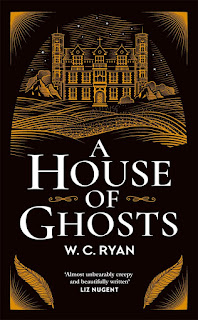 
It's Christmas 1917, and guests are gathering at Blackwater Abbey, the island home of Lord and Lady Highmount. This isn't a normal festive gathering though - on the longest night of the year, while the war continues to rage in France, a seance is to be held under the supervision of Madame Feda and Count Orlov, two celebrated mediums, to contact the Highmounts' two sons, both killed in the conflict, and possibly another young man - Arthur Cartwright, who's been posted as 'missing', but is believed to also have died. The party therefore includes his parents, and sister Kate, long-time friends of the Highmounts, but Kate has a second secret reason to be there.

Lord Highmount is an important arms manufacturer, and some of his weapon designs have been found in enemy hands, so Sir Mansfield Smith-Cumming, head of the government department in which Kate works, is sending along an undercover operative, Robert Donovan, to track down who is leaking such valuable information, and Kate with her insider knowledge of the house and its inhabitants is to help him where ever possible.


I found A House of Ghosts to be a rather odd book - not so much it itself, as the way it's promoted - as I'd expected something ghostly and spooky, and didn't really find it to be. There ARE ghosts, plenty of them - people who've lived and worked at Blackwater Abbey in the past, men who've died in trenches of the Somme  - but Kate and the other medium who can see them treat them in so matter a fact way that I didn't find them scary, even when speaking through the mediums.


On the other hand it's an excellent blend of 'country house' and 'spy' thriller. The setting is pure Agatha Christie - guests arriving at an old brooding house, finding themselves cut off from the world, and help should it be needed (you can bet it will!), as a wild winter storm rages outside. And then someone starts to attack the guests one by one ...
It's gripping and tense, but just not spooky in my opinion.


And if you like a bit of romantic interest along with the sleuthing, there are signs of a growing attraction between Donovan and Kate, an aspect that I feel may be further explored in future stories - for I'm certain we haven't seen the last of this pair.

Tell Me No Truths by Gill Vickery 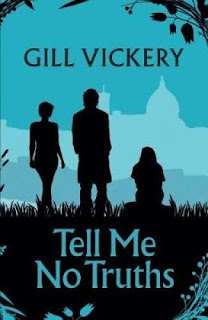 Twins Jade and Amber have always been fascinated by the stories their granddad told of his Italian childhood. During the war he was a member of a partisan group, fighting against the fascists, but at the end of the war he moved to England, and never returned to Italy. Now the twins are heading to Florence on holiday with their parents, and while the adults are off admiring art and antiquities, they hope to visit Borgo Sant'Angelo, the village their grandfather grew up in just outside Florence, and maybe track down their long lost relatives.
In Florence they meet another English teenager on the trail of a mystery. Nico and his mum both love the crime thrillers written by reclusive author E J Holm, and set in the area around Florence. The author is so secretive that no one is even sure if they're male or female, but both Nico and his mum feel by tracing the locations of the novels, they will uncover E J Holm. His mum may be expecting they'll be working together but Nico hopes his mum will be sidetracked by her latest, rather irritating, boyfriend, and he, Nico, can uncover E J Holm's identity on his own.
The three teenagers join forces to give their parents the slip, but soon find their investigations entwining as the family history uncovered by the twins starts to show a remarkable resemblance to the back stories of E J Holm's fictional victims.

Tell Me No Truths is a totally gripping teen 'detective' story, moving between present day Italy and the 1940s, uncovering wartime love and betrayal, and the identity of a secretive writer. The three teenagers are on the hunt for answers to a variety of questions - Jade and Amber's search is a purely personal, family matter, whereas Nico's is born of insatiable curiosity, and a need to solve the puzzle before his mum does!

Their adventures are interspersed with the reminiscences of a British soldier sheltering with Italian anti-fascist Partisans, and as the reader soon begins to realise that these memories tie up with the tales recounted by the Twins' grandfather, but aren't quite the same. Someone has changed vital details as they've told the story! His tale also brings into sharp contrast the modern, careful, happy, bustling with tourists holiday vibe of Florence today, and the fear and hatred gripping its inhabitants in the 1940s; giving the reader an insight into those troubled times and bringing the past vividly to life.