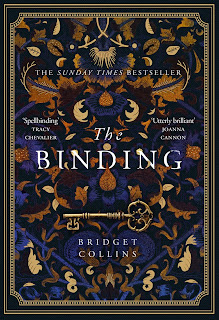 A Question of Trust by Jonathan Pinnock 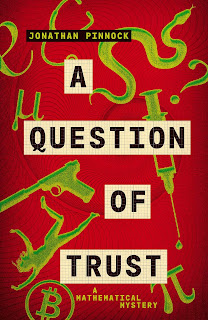 Life always seems unnecessarily complicated round Tom Winscombe. Just when he thought things were settled, his bizarre luck strikes again and everything comes unraveled. His girlfriend Dorothy has gone missing, and her company's offices have been cleared out; all the PCs stolen, all the money gone.
Now Tom is having to share a bed-sit with Dorothy's business partner, Ali (not Tom's biggest fan). While she desperately tries to keep their company going, Tom's priority is to find out what's happened to Dorothy. Is it feasible she's run off with the money and equipment? Could someone else have stolen it and be holding Dorothy hostage?
Meanwhile, Tom's father has got tangled up in some cryptocurrency scam, an old presumed-dead acquaintance has re-surfaced, and another definitely-dead acquaintance is sending him LinkdIn messages. Life's certainly not dull around Tom!
So off he goes on another escapade; an innocent caught up in a world of criminal activities and dodgy dealings, with little but his luck to help him. This time he gets mixed up with questionable city types, an off shore independent country in the Bristol Channel, crashing a stag weekend, an escaped python and an unusual use of the Fibonacci sequence - with plenty of dangerous James Bond style stunts (though Bond would probably have pulled them off with a bit more grace and panache). It's hectic, frequently dangerous, sometimes darkly humorous, sometimes laugh out loud slapstick.

As with Tom's previous mis-adventure The Truth about Archie and Pye, it's not a serious, grim Nordic Noir thriller, more 'James Bond meets Simon Pegg/Edgar Wright', or Adam West's Batman without the cape. It could all turn deadly, but it's undeniably fun.

The Wolves of Winter by Tyrell Johnson 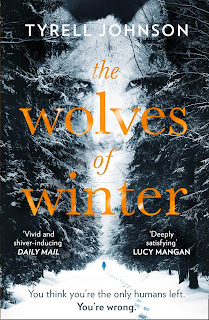 When society started to crumble around them, Lynn McBride's extended family left home and headed to the wilds. Here they survive on the animals they can hunt and eat, and the few vegetables that will grow in the inhospitable Arctic conditions. Life's hard and monotonous. Their small settlement hasn't seen other people in years - then one day a stranger, Jax, wanders by, bringing with, or at least behind, him remnants of the old world, and trying to survive takes on a whole new meaning. Lynn is forced to face up to her father's past, to come to terms to what he had been doing, and how it could affect them now.

I've tried my best but there are bound to be spoilers here - sorry.

I seem to be reading a lot of post-apocalyptic fiction recently. I'm not sure if this is reflecting a publishing trend, or just my personal tastes, but, anyway, here we are again after the 'end of the world as we know it', in the Canadian Yukon this time.
The familiar mix of war and flu have cut the population drastically, and if there are more survivors than Lynn and her family, they too are living hand to mouth. One aspect of the past that has managed to survive though is a government scientific programme, which has a particular interest in Jax, and, now she's been brought to their attention, Lynn. What you end up with is part post-apocalyptic survival story, part government conspiracy thriller - and it works well, although ti wasn't at all what I was expecting. After a slowish start, things kick off and you'll be hooked (I was).

The setting is unusual - the cold, snowy north - and brilliantly brought to life, even when I quibbled about some of the details of survival there.


One aspect that marginally disappointed me was that the ending seemed to be setting up for a sequel, maybe even a series. Don't get me wrong, I liked The Wolves of Winter, and it does round off to a nice conclusion, but I'm happy for it to end there, rather than have the story spin-out forever.