The Truth about Archie and Pye by Jonathan Pinnock 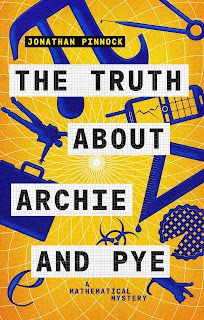 Heading home on the train after a career-ending bad day at work, Tom Winscombe isn't really in the mood for social chitchat but gets drawn into conversation with the guy sitting next to him - George Burgess, an author of 'conspiracy' books, currently working on a biography of mathematical geniuses Archibald and Pythagoras Vavasor, who died in suspicious circumstances ten years ago. Getting off the train, Burgess leaves his case behind, and Tom decides he'll return it the next day. Before he has chance to, Burgess is killed, and Tom finds himself holding documents that people are willing to kill for. Very soon he finds himself pulled into the murky world of conspiracy theories, murder, mathematics and Belorussian mafia.

If you like your thrillers a little quirky and off-beat, this is the book for you. Basically the story is one of slightly irritating but still like-able guy drawn into the realm of ruthless killers, through no fault of his own except maybe a certain innocent gullibility - Tom is the sort of guy who rushes in where cautious folk fear to tread, who hearing howling noises from a lonely deserted house would go to investigate, and wonder why he stumbled on a crime scene straight out of a horror story. Don't expect a serious Nordic Noir style thriller but something more the style of a Douglas Adams' Dirk Gently novel with the added frenzy of a Simon Pegg/Edgar Wright film. It's fun, fast-paced and full of intrigue, and I loved it!

Also, don't let the subtitle 'a mathematical mystery' put you off. While it's the basis of a lot of in-jokes, the reader doesn't need to understand the finer points of maths, any more than you need to understand astro-physics to watch The Big Bang Theory - it's enough to know that someone somewhere is willing to murder to obtain the Vavasors' notes.

The Truth About Archie and Pye is the first of a series, and I for one am eagerly anticipating Book 2!