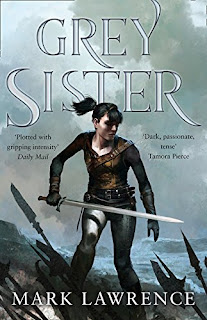 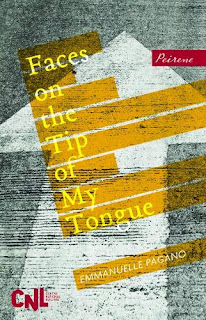 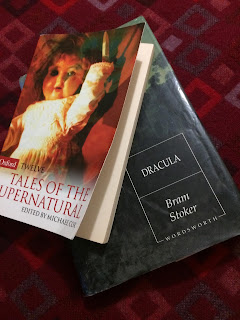 For Halloween I thought I'd look round the bookshelves and see what I had sitting waiting to be read in the way of scary supernatural reads - and these were the first to come to hand; Bram Stoker's Dracula (unbelievably, perhaps, I've never read it!), and a short story collection, Oxford Twelve Tales of the Supernatural edited by Michael Cox. I thought I'd have time to read both before Halloween, as neither are very long, but things didn't work out that way.

I started with the collected stories. Hmm, that didn't go well. I've said before that a lot of supposedly scary stories leave me cold, but in a bad way, and these did that. Despite some big names among the collection - LeFanu, and M R James, for example - they didn't seem spooky or tense to me. Maybe back when they were 'new' there was an element of surprise to them, but I found them dreadfully predictable.

On to Dracula ... although I haven'r actually READ this before it's difficult to not have some idea of the plot from films, even if they aren't entirely 'as the book'. It's hard therefore to put yourself into the mindset of someone reading the book with no idea of what will happen, of why the Count can only see his visitor at night, of why it's probably best for all concerned that Jonathan Harker does as the Count tells him and stays safely in the rooms assigned to him. I was also afraid that like some of the short stories it would just be so predictable. It was, as obviously I'd an idea of the plot, but it was still very readable. The writing conveys a definite feeling of growing dread, but having reached a high point, instead of attempting (and possibly failing) to maintain it, moves back to the more prosaic world of daily domesticity - and manages to pull this off several times. The Count of course moves to England and attempts to continue his vampiric ways here, but a group of young men, aided by vampire-expert Van Helsing, strive to put an end to him. Towards the end, I felt the story became more 'thriller' than ' 'supernatural tale' but was perhaps better for it.
It's a bit slow at time, especially when Van Helsing is explaining something, and there are dodgy attitudes towards women and 'foreigners' but in all it's a good read.