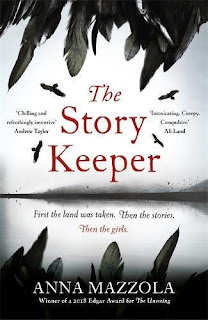 The Football Trials: Game Changer, and All Out Attack by John Hickman

Jackson is a really talented footballer. Spotted in the park by a scout, he's earned a place at United's football academy, and he's hoping to make the U18 team. Everyone says his future looks bright, but things aren't going smoothly for him at the moment. In Gamechanger, Jackson's long-absent dad turns up out of the blue, but is it just to get to know his son and repair their relationship, or does he have an ulterior motive? In All Out Attack, Jackson's granddad falls ill, and his football - and temper - suffer. Getting angry and violent during a game puts Jackson's position on the team at risk. Will Liam, the manager, give him a second chance?

These two short books (80 pages approx) are part of Bloomsbury's High Low series, produced in association with literacy experts at Catch Up, a charity which works to help teenagers overcome reading and numeracy difficulties. Aimed at young teen readers who through lack of interest, dyslexia, or struggles with English as an additional language, have a reading age less than their years, the books have font which is large and clear, tinted pages, and illustrations to bring the words to life. Both books have 'bonus bits' at the end - little quizzes about the story, and information about helping with the issues raised, or help with understanding some of the more complex words.
None of this matters of course if the story fails to catch the reader's imagination, but I'm sure these will. Not everyone can be a football prodigy, but the issues facing Jackson, his feelings and behaviour are all things that teens can relate to - they may sympathise with him, they may think he's being foolish or hot-headed, they'll definitely have an opinion!

Publisher - Bloomsbury
Genre - football, teen issues, aimed at 12+ age but with a reading age of 9+

The Adulterer's Wife by Leigh Russell 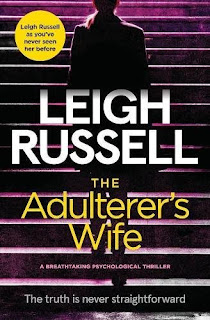 Julie accidentally finds out that her husband is having an affair and decides to tackle him about it and throw him out but only after their son's final exams, until then her knowledge will remain a secret from both of husband and son. Getting home from taking her son to sit that fateful final exam she finds her husband dead - in bed.

Naturally Julie becomes the obvious suspect and as she came home drunk and can remember nothing of the previous evening can she be sure she didn't do it?

As the police keep strengthening their case she sets about trying to find the truth.

This story is very different to the Geraldine Steel mysteries that Russell is normally associated with and this deviation, like the Christmas short story, shows once again how flexible this author is. There is no prize for guessing the outcome but, once again, it's the way the outcome is reached that keeps you hanging on the edge of your seat. And then there's a final twist where it all hangs in the balance...

Opening with the scene where Julie finds out about the affair is a great way to capture the reader from the very start. How would you react? How would I react? I have to admit that I have no idea and to see Russell's interpretation of Julie's reaction was eye opening in many ways. And as Julie undertakes some completely irrational actions you find you can't challenge them because you don't know what insanity would kick in.

Then... as you read on and the case against Julie builds Russell investigates the rights of the child in such a situation and how this affects Julie.

An extremely compelling book for various reasons at various points that will have you reading right to the end - despite knowing the murderer already.

Genre - Adult crime
Publisher - Bloodhound Books
Posted by The Mole at 09:34 No comments:

Love and Ruin by Paula McLain 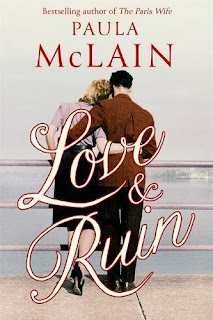 In 1936, young aspiring author Martha Gellhorn walks into a Key West bar and meets Ernest Hemingway. The attraction is immediate, but he's married (to his second wife) with three children, and she's much younger and already been badly let down in an affair with a married man. A year later, they both head off to Madrid as journalists covering the Spanish Civil War, and, thrown together, fall rapidly and recklessly in love.

This is a story I was already familiar with, if only in outline - the sort of thing picked up from the author biography at the back of paperback - and it's not necessarily easy to turn fact into readable, engrossing fiction, but Paula McLain has. It isn't entirely new ground for her - she's already visited the subject in The Paris Wife, which told the story of Hemingway and his first wife Hadley Richardson - but Martha Gellhorn stands out from the other wives (there were four in all) as being well known in her own right, as a war correspondent.

When they meet, Hemingway is well on his way to being a literary superstar, and Gellhorn still trying to find her feet as a professional writer, but in Spain she finds her calling, reporting the horrors of war, bringing home the impact on people caught up in conflict, and as the years pass the balance of power - in the shape of literary success - begins to shift between the two; after the huge success of For Whom The Bell Tolls Hemingway's career grinds to a halt, just as Gellhorn's starts to really take off. She soon finds herself facing a choice - become a stay-at-home wife and mother, as women were in the '40s, or carve out a career for herself, and risk losing her husband.

Told primarily from Martha's point of view, McLain captures the passion that brings these two  together, the differences and similarities that ultimately tear them apart, and the trauma of war in which she finds her calling. The short passages told from Ernest's perspective give in insight into how he feels, a desire for a settled 'normal' happy marriage, and an inkling of the black moods that enveloped him later. As I say, I knew the outlines of the story already but McLain gives a fascinating insight into this doomed relationship, brings the characters to life and by the end I felt I knew them well. For what it's worth, my suspicion is that Gellhorn and Hemingway were too alike to ever be happy, both ambitious and focused on their work, but it was that similarity which attracted them to each other, and if Martha had become the home-maker Ernest wanted, the relationship would still have failed.

Swimmer Among the Stars by Kanishk Tharoor 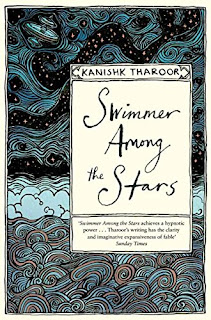 
I seem of late to be reading a lot of short story collections - possibly because I don't feel I have space in my personal life to commit to novel-length reads, so books like this that once might have got relegated to the TBR pile are getting more of a look-in.

Now, the obvious thing about short stories is that they're meant to be read as individual, stand-alone pieces, so it seems a little odd to say it took me a while to get 'into' this book. The first couple of stories - about the last speaker of a dying language, a city preparing to be invaded - left me 'hanging' in some way, but then, with an elephant's journey from India to Morocco, and the plight of UN ambassadors trapped on an orbiting space station while the world below them descends into chaos, I started to get a feel for the author's style and pace, and settled down to enjoy the collection.
My favourite section was The Mirrors of Iskandar - fourteen short pieces re-telling stories of Alexander the Great, with a mix of fantastical adventures and moral fables - but I also loved other stories - The Fall of an Eyelash, about the desperate hope of an exile to be reunited with her family, Icebreakers, the tragic yet almost farcical tale of 'rescue' ships stuck in Antarctic ice.

On the whole I'd describe the collection as whimsical, frequently tinged by sadness or loss. The author is someone new to me, and I'd certainly look out for future work.