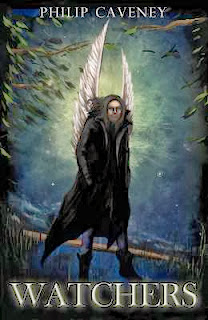 Will Booth's father was knocked off his bike and killed a year ago but both Will and his mum are not getting over it. Will sees it in his mum and feels it in himself and try as he might he can't get either of them to start to move on. Then one quiet day, while walking his dog, a scruffy looking strange man tells him his dad has a message for him. Wary, frightened and very much spooked, Will flees back home only to meet him again the next time he's out walking and then he tells Will he was waiting for him. And then Will has the most terrifying time of his life with his family and friends in mortal peril.

This is one of those books that if you write a synopsis, any synopsis, you cannot do the book justice. Many a book has a fantastic synopsis but you end up reading something that bears little resemblance but this book... I have read (and enjoyed) Philip Caveney's writings before but this was something different - it was even more captivating. It's a book I definitely wanted to get to the end of but I didn't want to finish.

With an audience of 9+ (in my opinion) this should appeal to boys and probably girls too. Thoroughly enjoyable and an easy read.