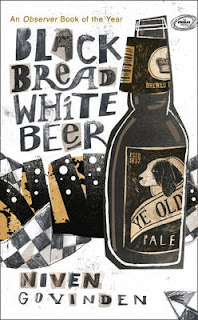 Amal and his wife, Claud, are in their thirties when Claud miscarries after just three weeks of carrying their first child. Amal is devastated not only for himself but for Claud as well. Things that need to be said don't get said, fears are bottled up as well as tears locked away. They don't want to tell their friends and family because of their own disappointment and how their friends may react and think of them. They drive down to Claud's parents for the weekend so that they don't have to address the issue and pretend the miscarriage never happened. How long can this state between them continue?

This very emotional issue is one that affects more people than care to admit it. Here Govinden approaches the issues between the couple and he doesn't do it in a teary sort of way but he doesn't belittle the issue either. Told from Amal's perspective, as a Briton of Indian birth who has married a white English girl we experience his frustration at not being able to talk to Claud for fear he will say the wrong thing while Claud raises the defences against everyone believing that the miscarriage was her own fault. At the same time Amal is seeing racial slurs from most everyone they meet. The tension between them is immense and as the weekend progresses it is getting no better. Can they deal with all this?

I will admit that I had a little difficulty with the editing in places, the kind that you reread and think "No, it should be... but maybe at some level this work works?" which I found a little frustrating and distracting but that could just be the author's writing style but put that to one side. I did find this book extremely engaging and caused me to reflect on the lives of friends and, to a certain extent, my own and I saw and felt most everything that Amal experiences. But I would like to go on record as saying that I would handle the washer situation a great deal better than he did!

Why the title "Black Bread White Beer"? Frankly I have no idea and normally you find at least one reference to the title in the book but I found nothing to explain it.

As it leaves the tears to one side, this book should appeal to both men and women. If I gave stars for books then out of five, I would give this one at least 5.