The Naming of Tishkin Silk by Glenda Millard 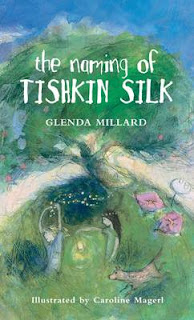 Griffin's father calls him an 'uncommon' boy - and yes he is. He also comes over as burdened with a secret - one that leaves him with a sombre air. He is just starting school and the qualities that make him 'uncommon' are also the ones that lead to him being bullied. When Layla, a classmate, approaches him their friendship is sealed in moments. Layla knows that there is something wrong in Griffin's life and knows she cannot ask about it... until one day when the time is absolutely right.

I found that this story, although aimed at the younger reader, was totally engaging and I found myself unable to put this book down. Fortunately at 95 pages and aimed at younger readers it didn't take long to read. Although the family and its customs were something that I could not relate to, they were so different to the 'norm' that it didn't retract from the story at all. After reading I found it was set in Australia which accounted for some of the words which I had accepted as idiomatic.

Although this series of books has won many awards in Australia, I did find myself wondering what age group it was targeting. The message it carries, with so great an effect, is as relevant to parents as it is to children, and I found as a parent that the story was highly readable. The black and white drawings that are dotted around the book do, however, give the feel that it is targeted at the younger reader.
An excellent book - now to move on to "Layla Queen of Hearts" the second book in the six book series.

Buy The Naming of Tishkin Silk (Kingdom of Silk)