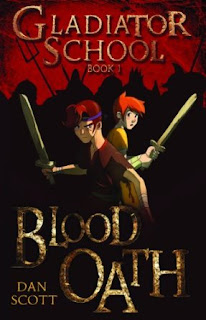 Young Lucius finds his life turned upside down when his father disappears without trace - but taking some favourite possessions with him. Accused of being an informer his family is disgraced and force to move from their luxury home to the suburbs. Needing to do almost anything to survive, his brother, Quintus, signs on for gladiator school and takes the blood oath, and Lucius takes to running errands for an uncle he doesn't trust. Is this how far they have fallen? Can things get any worse?

Set in 79AD, this story also informs the reader on what life would have been like in Ancient Rome. It doesn't concentrate on the glamorous side but dips it's toe into the crime and corruption that was so much a part of Roman society - but firstly it's a story of a young boy. It could also have become a love story but it didn't (which will please potential young  male readers), despite having a high profile, strong minded girl in the plot (to appeal to the young female readers). Set in a gladiator school it cannot ignore the death and gore that gladiators stood for, and it doesn't but it talks of it in an educational, factual way that neither group of young readers will be offended by. But it's 'book 1' and the ending reflects it - grrrr. What will become of Lucius and his family? We'll have to wait to find out.