Five and a Half Tons by John Bayliss 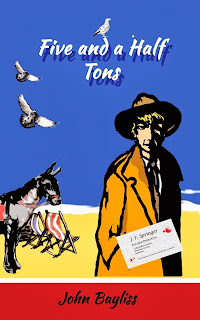 Springer is a private detective in a small seaside resort. Not a very good one. Private detective that is, although the resort is not one of the top ones either. It's the 1960s and he's short of money, but not short on debt so when a case of a missing wife comes his way he leaps at the chance. She almost finds herself and when Springer goes to break the news his client starts shooting at him from an upstairs window and then shoots himself.

And this is just the start of the story.

Springer reminds me very much of Douglas Adams's Dirk Gently in that neither has any real ability (and Springer is told this by just about everyone he meets) and both find the solutions, given time, throw themselves at the detectives. And while the humour is not as overt as Adams it is most certainly there and adds to the enjoyment of the book.

The underlying plot gradually does present itself to Springer and in doing so I found it to be well rounded and most enjoyable. Just a couple of niggles though...

There are pictures inside at various intervals and, while I am no expert, I found them to be a distraction and irrelevant and wondered "Why?". And the other was the proof reading was of a much lower standard than I would expect to find in a final print edition. Now I do read a lot of proofs that have "proof" splattered on them so you expect errors to be picked up but with ebooks it's a lot less obvious what stage this version is at.

That aside... I loved this book and wish Springer every success in his chosen career - even if everyone in the book seems to doubt him!

Buy Five and a Half Tons