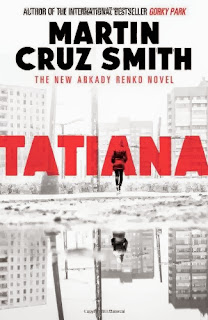 Moscow detective Arkady Renko is back  - this time trying to connect three seemingly unrelated deaths and solve an uncrackable code. Attending the funeral of murdered gangland boss Grisha Grigorenko, he's sidetracked by a protest about the death of reporter Tatiana Petrovna. With a record for exposing corruption and cover-ups in government circles, Tatiana had innumerable people who might have wished her dead - so the official verdict of suicide seems a little less than credible. When the clues lead him to the Baltic port of Kaliningrad, Renko finds another body - this time that of a translator with links within the government and Grisha Grigorenko's operations. The translator leaves behind a notebook that Renko believes would reveal the link behind the three deaths and all manner of dodgy dealings between the government, criminal gangs and foreign powers - if only someone could make sense of the translator's very personal indecipherable code.

I first discovered Arkady Renko through the film of Gorky Park and have been following him ever since
- through the break-up of the old Soviet Union, the highs and lows of his personal life, his struggles with accepting any authority, and with shrugging off the ghost of his violent father. He's still the same rather dour, downbeat, glass-half-empty guy that he was back then - just maybe more disillusioned, if that's possible, with the passing of time. That doesn't make it sound like this book would be a barrel of laughs but the other constant in his life is his unerring ability to track down the truth, no matter how deeply hidden. So like a bloodhound, he's off on the trail from Moscow to Kaliningrad, searching for something, even though he doesn't yet know what it is.
In comparison to some crime novels, this is quite slight at 320 or so pages. It's not lightweight though - there are no long-winded descriptive passages, it's heavy on dialogue which carries the plot and develops character, and every word is made to count. The passages where Renko listens to Tatiana's taped reports of the Moscow Theatre siege, the Chechen school massacre or recordings from the doomed submarine Kursk are heart-stopping and better for not being over-worked. Scenes like these take this novel beyond mere 'crime thriller' status.
At it's heart though, is the mystery connecting these three dead bodies, a race to find and decipher the code book and save Russia from another disaster. The only very slight let-down was the rather simplistic drawing of the 'gangster' characters - they all seem just a little too cut from the same mould but fortunately they don't detract substantially from the overall impact.

from Amazon
Posted by maryom at 14:58