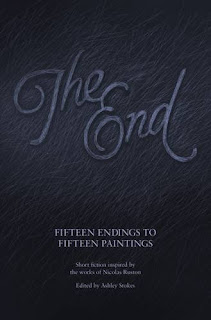 The inspiration behind the short stories in this collection is the artwork of Nicolas Ruston. Fifteen different paintings were created together, all in the same medium and all with one thing in common - they all featured the words "The End". Unthank then charged fifteen authors with coming up with the stories behind those paintings.

An image of the painting appears before the start of each story and its sub title - the story's  title - is added on replacing the number the artist originally gave the piece. The book was launched at an exhibition of the paintings in Norwich earlier this month with readings from some of the authors and even wine - The End Wine - in bottles featuring the images of the paintings and quotations from the stories. Sadly it was a launch I could not attend despite being one I would have loved to.

The first story in the collection reflects on what endings are. With each painting resembling the final scene in an old black and white movie it's easy to imagine what an ending might be, but why be constrained by expectations? - step outside of it and explore other endings - and being from the stable of Unthology that's exactly what these tales do.

Each of these works is a big step away from the other fourteen in both style and content and while melancholy is frequently a major factor it is presented in so many different ways. Being an Untholoholic I expected great things of this book and was not disappointed.

I often reflect on my favourite short story in any anthology - in this case I had fifteen so we won't go into too much detail.


There isn't one story that doesn't 'belong' and every one will bring something to your reading. Another brilliant idea and collection from Unthank that once again begs the question "What next?". I have seen speculation about the idea of "The End II" but it's difficult to see how it could be as great as this - but this publisher has surprised me too often in the past.