Stop at Nothing by JT Brannan 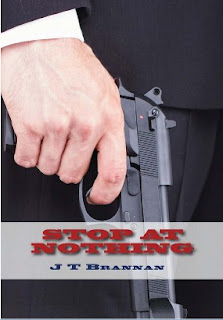 Mark Cole is a deniable operative for the US government, a patriot who is always willing to give his life for his country. Living in the Caymans with his wife and two children, he is no longer fully active, but due to his unique abilities he is called upon to perform a difficult assassination. The target is the Director of the CIA’s National Clandestine Service; but after the mission, Cole becomes a target himself. And as the forces against him mount up relentlessly, he realises that greed and hunger for power at the highest levels means that he can trust nobody. Cole discovers that not only are thousands of lives at risk, but his own wife and children are threatened. Pushed into deciding whether to protect global security or to save his family, Cole vows that he will stop at nothing to do both – whatever the cost.

Fast paced from first to last this book will interrupt your life until you have finished it. It reads as though you are watching a film but who is playing the role of Cole? Arnie, Sly, Segal, Butler? Well none of them are tough enough for this role. Park "disbelief" somewhere quiet before picking this book up and just concentrate on the fun and sheer enjoyment of this book.

This book was Brannan's first book but it was never published and after Origin (reviewed by Maryom) was published by Headline, his agent suggested he put Stop At Nothing out as a kindle independently without further refinement. It lacks a little editing in places that have led to a few 'continuity errors' but don't get hung up by it, read it for what it is meant to be: entertainment not edification. Origin has now climbed much higher on The Mole's TBR pile.

Sadly Stop At Nothing is only available in Kindle format but this will test your PC's scroll  bar to the maximum as you try to scroll fast enough to keep up with action.

Buy Stop At Nothing