Welcome to the Multiverse * Sorry for the inconvenience By Ira Nayman 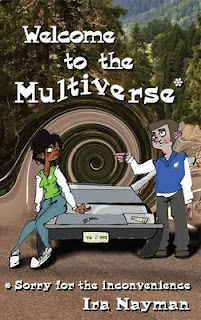 Noomi Rapier has joined the Transdimensional Authority and joins Crash Chumley on what is Noomi's first case. A man is found dead beside his Home Universe Generator but while his death doesn't appear suspicious the case is based around what he was doing to the insides of the Home Universe Generator - tampering with their workings is an offence. Noomi ends up chasing across multiple dimensions and meeting herself where ever she goes. Is she being played for a fool?

It's difficult to sum this book up. Think Douglas Adams. Think Tom Holt. Think Robert Rankin. Stir it all up with a little Spike Milligan and you start to get close. It didn't have me laughing out loud but it kept me smiling, amused, intrigued and reading. A great read that is highly entertaining and while it is funny throughout it isn't the kind of story that relies on one-liners and punchlines.

The story is sort of sci-fi but then again it also feels like fantasy as the sci-fi is SO different and extreme. It feels like a whodunnit but you won't be presented with enough suspects to even start guessing. There's a LITTLE sex in there but no real romance - it's all done in the best possible taste.

One thing I am confident of is that if you want something to not take seriously and lighten your mood then this will suit you.

Buy Welcome to the Multiverse: Sorry for the Inconvenience