The Janus Cycle by Tej Turner 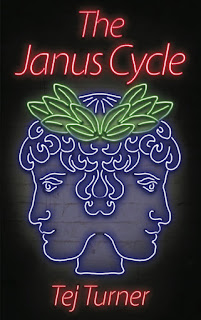 Janus is a nightclub but one with a reputation for tolerance and individuality.

The story is told through lives of 8 separate narrators although each is visited at some point and invited, nay pleaded with, by a girl to go to Janus every Friday. She encounters characters for the first time and refers to them by name but later when she meets them, they know her but she doesn't know them.

Is she making mischief or really a time traveller? And why is she trying to assemble all these people at the same time? And who is she running from?

Time travel is a concept that easily attracts plot flaws but in this short novel (218 pages) Turner has been extremely careful and crafted an excellent story. Some of the characters you will love and some you won't but give them all chance to be a part of the whole - it's well worth it.

Like "The Time Traveller's Wife", there is no technology involved instead there is a genetic trait that makes it possible. You know, believe or suspect from the very start of the book that something terrible is going to happen at Janus but no teasers are offered so when you find out you are totally unprepared for the horror about to unfold.

A real page turner that will keep you reading.