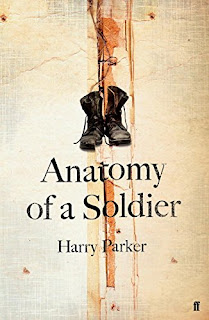 Harry Parker's debut novel, Anatomy of a Soldier, is one I've heard a lot about but not read, so this was one of those events that at a 'pay-as-you-go' book festival I might have missed. As it was, I took a chance on his event and I'm glad I caught it.

Anatomy of a Soldier is the story of Capt Tom Barnes, BA5799, who loses both his legs as the result of an IED explosion, and it clearly draws on Parker's own experiences in Iraq and Afghanistan, although the novel's war-zone is never defined.

Instead of going for a first person, biographical-style account, Parker chose to reveal events though the 'eyes' of 45 inanimate objects, closely associated with Tom Barnes, his family and the people who planted the IED. Each object narrates a chapter of Barnes' story, starting with the explosion and moving backwards and forwards in time. These objects are as diverse as a tourniquet, a handbag, a bicycle, or a Persian rug but probably the most gruesome is the saw which amputates Barnes' legs - Parker admits he was trying to write a chapter to make people 'gag'.
And as if this wasn't a challenge enough for a debut author, Parker started out with the interesting concept that the chapters would be self-contained, and possible to read in any order, but abandoned this idea to give him better control over the unwinding of the  plot.

All in all, the event gave me the feeling that this book is a far cry from the slightly sentimental, perhaps overly-patriotic, gung ho read I'd expected, and I shall be adding it to my 'must read' list.


By the way, there's no photo of the actual event because this was one I took the dog along to. It's a lovely idea, but hanging on to his lead makes note-taking difficult and photos almost impossible.
Posted by maryom at 20:16