Maysun and the Wingfish by Alison Lock 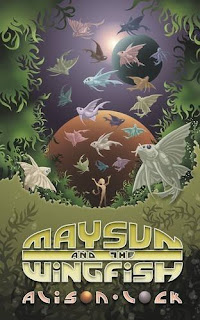 Life on Maysun's world is precarious at best. Although her people, the Watterishi, try to live in harmony with other creatures, a shortage of their staple food, leaves of the Gringrow plant, is causing them to over-pick and deplete supplies for both themselves and the Wingfish who also eat them. Then to make matters worse, a rare celestial alignment of their moon at the full and the seemingly wandering planet Ares creates a condition known as the Soomoon, which causes devastation to the  planet. The earth shakes, mountains crack open, lakes overflow, and Maysun's people are left struggling to survive.
Separated from Maysun's valley by a dark, dangerous forest of Ruba trees, lies another world - that of the Peakerfolk who live high among the mountains. They too are slowly starving to death, and at risk from the earth-shaking that the Soomoon brings. Maysun must venture into this (to her) strange world on a quest to bring harmony back to her world. Fortunately, not everyone living above the tree-line is the savage, brutal sort of person tradition had taught Maysun to expect.

In Maysun and the Wingfish, Alison Lock has conjured up an extraordinary world - one in which fish can fly, trees can trap people, and eco-systems change almost overnight by the passing of the planet Ares. The people living there are, not surprisingly, struggling to survive, and it's only by a change in their thinking and moving forward through cooperation that they'll survive.
This isn't though just a book preaching about the dangers of ecological disasters. There are certain magical or fairy-tale elements to it - the dancing flying fish who respond to Maysun's song or the Ruba trees which snare victims in their sticky goo - and most importantly a good story-line following the adventures of Maysun and Barco, a Peakerfolk boy who in his stumbling way helps to bring about reconciliation between at least some of the members of each population.
I'm not sure what age group I'd recommend it for - some of the words would suggest an older readership of maybe 10+, but I think younger children would enjoy it being read to them, and even adults may appreciate this fantasy adventure.