The Cottingley Cuckoo by A J Elwood 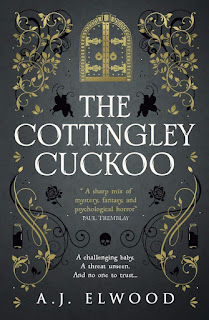 Charlotte Favell, one of the elderly residents at Sunnyside Care Home, has taken a strange interest in Rose, the new member of staff. With an interest in literature and fairy tales, Rose is lured by the old lady's talk of the infamous Cottingley fairies hoax, and the hints that she has letters which prove the existence of the fairies beyond all doubt. More experienced staff at the home warn Rose that Charlotte has played similar tricks before, causing trouble for her carers, but Rose's curiosity is insatiable, even though she feels she's being dragged into a dark web of, perhaps, supernatural events.

I accidentally came across The Cottingley Cuckoo on Twitter, and it probably isn't quite like my usual read but I really enjoyed it. There's a slightly slow start to the story but like Charlotte herself it gradually works its spell and hooks the reader.

It's a difficult novel to pin down by genre - it has the suspense and twists of a psychological thriller, a tinge of supernatural horror, a subtle lack of clarity over whether Rose is being manipulated, or just an unreliable narrator. There's a clever interweaving of Rose's present day story as she falls under Charlotte's spell, and the old letters, purporting to be written by a Cottingley resident  who actually saw the fairies himself, and could attest to their disruptive and occasionally malevolent ways. At times it seems like everything is merely Rose's imagination, and that Charlotte is just the troublesome old lady the other carers she her as; at times it seems like fairies could be real, and Rose is caught up in something sinister.

And, although there are hints and common sense alone should raise a warning flag in the reader, the ending still comes as a shock.