The Damask Rose by Carol McGrath 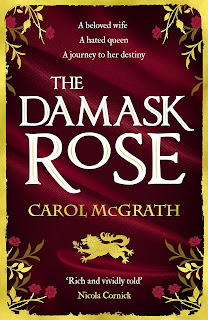 1266. Eleanor of Castile, adored wife of the Crown Prince of England, is still only a princess when she is held hostage in the brutal Baron's Rebellion, and her baby daughter dies. Scarred by privation, a bitter Eleanor swears revenge on those who would harm her family - and vows never to let herself be vulnerable again.As she rises to become Queen, Eleanor keeps Olwen - a trusted herbalist, who tried to save her daughter - by her side. But it is dangerous to be friendless in a royal household, and as the court sets out on crusade, Olwen and Eleanor discover that the true battle for Europe may not be a matter of swords and lances, but one fanned by whispers and spies . . .

Carol McGrath's latest series The She-Wolves continues with the story of  Eleanor of Castille, wife of Prince Edward (later to become Edward I of England). Married when Eleanor was barely a teenager, their relationship grew into one of great love, though their early years together were marred by the death of children in infancy, and the time Eleanor spent as a hostage, held in impoverished circumstances with barely enough money for food, by Simon de Montfort during the Baron's Rebellion.

From these inauspicious beginnings, Carol McGrath shows us a woman growing in determination, power, and love for her husband. In many ways Eleanor seems a remarkably 'modern' woman, not content to stay home, rear children, and quietly embroider. Vowing never to suffer such the trauma of imprisonment and poverty again, she resolves that whenever feasible she will stay by Edward's side, accompanying him on campaigns against the rebels, then further afield on Crusade. At the same time she sets about accumulating lands and wealth to protect herself against future hardship.

Intertwined with Eleanor's story is that of (totally fictional) Olwen, her herbalist. The two come together to create gardens of herbs and flowers, of healing and relaxation, for  Eleanor's new manor houses and the castles Edward builds as part of his campaign against the Welsh.

Throughout there's a wealth of historical detail, sprinkled unobtrusively to not mar the progression of the story, but underpinning it, giving it a real feel for the world of Eleanor and Olwen.

Next week, I'll be taking part in the blog tour for The Damask Rose but meanwhile check out the other posts here - 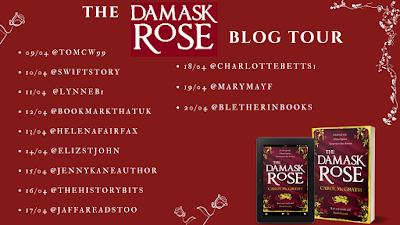