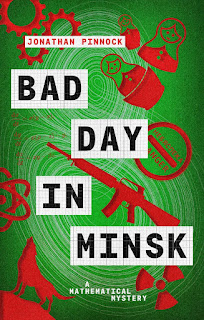 We've all had bad days, haven't we? But rest assured they've never been quite as bad as the one Tom Winscombe's having - kidnapped after a failed break in at the offices of a secretive think tank, sent under-cover into Belarus, kidnapped again (by Belarusan mafia this time), escaping, getting caught in a fire-fight between various gangs while the building burns beneath him ... It's the stuff of nightmares, but since he became involved in the affairs of deceased mathematical geniuses the Vavasor brothers it's become all too frequent an occurrence for Tom.

Bad Day in Minsk is the fourth in the Mathematical Mystery series by Jonathan Pinnock, and as much, if not more, fun than the earlier stories. Always inclined to stumble into the sort of trouble that ends up with armed men threatening him, Tom finds himself coerced into posing as an expert on chaos theory and sent to Minsk. He's on his own this time, without girlfriend Dorothy who usually saves the day but with luck on his side, and help from some new acquaintances, Tom manages to not only escape with his life but come out of it all looking quite heroic (if only Dorothy would see that!)

Full of thrills, tension and laughs in equal amounts, it's a fun read, which, despite the danger that Tom frequently finds himself in and the high body count among his adversaries, doesn't take itself too seriously. For me, it's the kind of escapism I need right now. It is possible to jump into the series at this point, as Tom makes great efforts to explain the back-story of his highly improbably adventures as he goes along, but I think it's best to start at the beginning with book one - The Truth About Archie and Pye .