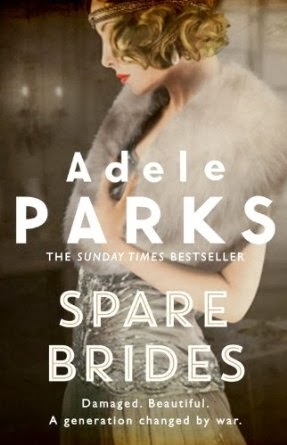 It's New Year's Eve, 1920 and four friends are getting ready for an extravagant ball to usher in the new decade. There's hope that it's now time to move on to happier, more hopeful times, but the shadow of the War still lingers in the horrendous loss of so many lives and the guilt felt by the survivors.
Spare Brides is the story of four very different friends; of how, in a world radically altered by the First World War, their lives, hopes and expectations have changed too. All come from privileged, wealthy backgrounds but there the similarities end. Ava is the daughter of an industrialist, made richer by the War; glamorous and fashionable, she turns heads where-ever she goes and can get away with almost anything but her life of parties and shallow love affairs is beginning to pale. Lydia, married to the Hon. Lawrence Chatfield, is sheltered and cosseted, living a life where harsh realities rarely intrude except for her one big disappointment, that after 8 years of marriage she remains childless. Sisters Sarah and Bea live very differently; after the death of first their parents, then Sarah's husband, they are now dependant on their crippled brother for house and home. Sarah with a war-widow's pension and two children is slightly better off but feels that life is over for her. Bea's life never really got started - all her dreams of marriage and a home of her own went out of the window with the death of her only suitor; she's too tall and too plain to find another in a world where eligible bachelors are in such short supply and so poor that she has to alter her old dresses to fit new fashions, . Their pre-war connections still see the sisters invited to fashionable parties but only out of sympathy and as favours to their richer friends.
What does the new decade hold for them? These are desperate times, when a woman needs to catch at every chance of happiness no matter where it may lead, so a chance meeting with a mysterious, extraordinarily attractive soldier shouldn't be overlooked.

Spare Brides has got everything you expect from a conventional romantic novel - glamorous parties, gorgeous clothes, an enigmatic hero and a passionate love affair - but it's far from a piece of light fluff. Alongside the glitz and glamour lies the heartbreak and devastation of the War, and it's continuing emotional impact. The story also takes a shrewd look at the changing roles and expectations of women in this period. All four women have been brought up to believe that their role in life will be as wife and mother, nothing more. But times are changing; husbands are few and far between, and women have more freedom and possibilities; hopes and ambitions need no longer be confined to the drawing room and nursery.
It's another great, absorbing read from Adele Parks. One that once started you won't want to put down, I certainly didn't.
The ending might be a little predictable but so what? Show me a Jane Austen ending that wasn't obvious a mile off!