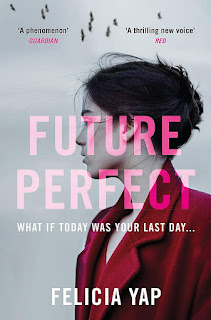 When a model is killed and several high-profile guests injured at a prestigious Manhattan fashion event showcasing the work of designer Alexander King, the race is on to catch the perpetrator before they can strike again - at a second show due to take place in London.

Police Commisioner Christian Verger has other worries on his mind though - his fiancee, Viola, has left after an argument, and his i-predict horoscope app is warning that he has 99.74% chance of dying that day. Maybe if he can catch the killer, he'll reduce those odds?  Meanwhile, unknown to Christian, Viola is working on hunting the bomber too, using a piece of software she's been developing to identify potential criminals - unfortunately the program points its finger firmly at Alexander King's close associates.

Set in the not-too-distant future, Future Perfect is a cleverly-plotted who-dunnit, with flashbacks to the troubled life of a teenager in Montana interleaving with the current day police hunt.

The flashback sequences work really well. They tell the backstory of one of the main characters, without stating which one, and, of course, lead the reader to try to guess who it is and how their story fits with the attack on King.

It wasn't as futuristic as I'd imagined it would be (I'd half-expected something closer to Minority Report) so although set in 2030 it's nearer to the crime sector of genre fiction than it is to sci-fi.  In many ways I found the story-telling reminiscent of a classic detective novel in which the crime is solved by interviewing suspects, and spotting the weak link in their account of their actions, rather than relying on cyber ware. There are various tech-y advances - bird-shaped delivery drones (rather like mechanized versions of Harry Potter's owl postal service), Viola's criminal-catching software, the i-predict horoscope app which foretells the day's events with uncanny accuracy - but these don't take over the story.