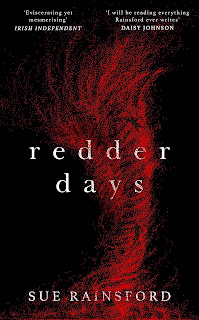 At some unspecified time (presumably) in the future, twins Anna and Adam live in the remains of the commune where they were brought up. Their mother left when she felt they were old enough to survive without her, and the other commune members have slipped away over the years. The twins' only companion is Koan, once the leader of the group holding a fierce control over the lives of everyone, but now much diminished, physically and mentally, by age.

The twins' lives follow a pattern of rituals, preparing for an expected cataclysmic end of the world, quenching the fires that burn from an underground mine, and keeping the area free from people and animals who show signs of the 'redness'. When former commune-members return, it becomes apparent that what the twins have been brain-washed into believing might not be true ...

Redder Days is a disturbing, dystopian novel, one in which a virulent disease is sweeping the world, endangering humanity, while society as we know it appears to have completely collapsed to be replaced by small communes, subject to their own rules. Against this backdrop, Sue Rainsford looks at at the undue influence one man can have over a group of willing followers, and how he manipulates and abuses his power.

The writing is dark, disturbing, uncomfortable with the story unfolding through a number of first-person narratives (not all reliable) set in different time-frames. This makes things a little difficult to follow at first. The reader is dropped straight into this strange world with no explanation, and I feel that having read it once, I'd like to go back, specifically to the early chapters, as I think I missed a lot of nuances. A lot is left for the reader to decide for themselves, particularly about the motivation of characters - for example how much did Koan deliberately mislead others? Was he acting maliciously or was he just mistaken?  It's certainly a book which left me intrigued, and wanting to read more by the author.