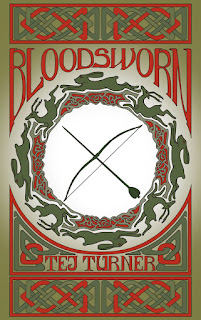 Book 1 of The Avatars of Ruin

“Everyone from Jalard knew what a bloodoath was. Legendary characters in the tales people told to their children often made such pacts with the gods. By drawing one’s own blood whilst speaking a vow, people became ‘Bloodsworn’.

And in every tale where the oath was broken, the ending was always the same. The Bloodsworn died.”

Since the War Of The Ashes the people of Sharma kept a standing army in case... well, in case. Representatives of the academy travelled around the country selecting the most promising candidates to be trained. In Jalard, Baird's job was to train the youngsters and recommend those he saw as fit for the academy. Kyra was the only woman this year who had got close to being noted by Baird and had high hopes of going.

I received an ARC from the author/publisher as a PDF. We have as little to do with PDFs as possible because of formatting. They won't deliver any longer to our kindle (a very early model with no backlight) and my phone has a much smaller screen making reading very difficult, if not nigh on impossible. But I gave it a try so I could honestly say "no". I tried reading the first few pages with a lot of page manipulation.

You know when you start to watch a TV box set on Netflix and suddenly it's two in the morning and you don't want to stop? That.

In most fantasy you quite quickly know who the hero is to be and who will be the focus. In this book Turner has a cohort of heroes who come and go so bank on no-one. Yes, a Bloodoath is sworn but what does it actually mean? It becomes apparent that the swearer may not know what needs to be fulfilled.

It moves fast in many arenas and jumps around time a little to rejoin earlier events. It's cleverly crafted but you never seem to get too attached to any one character.

Combining magic, fighting skills, and characters who have left their village for the first time and are learning hard truths, there seems to be something for everyone in this.

It feels like this volume is almost stand alone leaving no cliff hanger but threads are left to carry forward to book two. The bloodoath is not fulfilled and happy ever afters still seem a long way off. I really loved this book and can highly recommend it to fantasy lovers.

Having been reading Austen, Dickens, and some truly excellent crime recently, I wanted a change of pace - and I got it.