The Humiliations of Welton Blake by Alex Wheatle 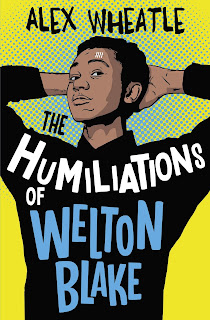 Welton Blake thinks things are looking up for him - he's plucked up his courage, asked out the best-looking girl in school, Carmella McKenzie, and amazingly she said yes. Welton can't quite believe his luck.

But life isn't that easy. Welton's phone breaks (so he can't set up their date), he sees Carmella hanging out with another guy, the school bully seems to have him ear-marked for special attention, and his mum decides her new partner and his young son should move in - and Welton will have to share his bedroom. Could life dump more indignities on him?

This is the first book I've read by award-winning author Alex Wheatle - and I can see why he's so highly praised and popular. He looks at teenage life, relationships, and problems in a funny but sympathetic way (sort of like Netflix's Sex Education but for a younger audience) Welton's doubts and insecurities are the sort that all teenagers share, and though you may laugh at them, secretly you've been there, done that.

Published by Barrington Stoke, it has all of their hallmarks - dyslexic-friendly print and page colour, and simple, straightforward language, which moves the story along instead of snaring the reader with unfamiliar words. It's an excellent short book for any teens (though particularly boys) who might think 'they don't write books about folks like me'.