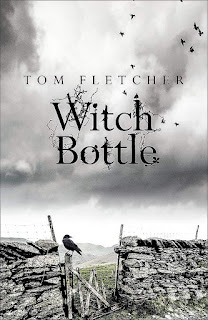 Once Daniel had a family - a wife and child - and a career, somewhere in a city vaguely 'down south', but now he's living alone, working as a milkman in the rural north-west of England. His job is undemanding, monotonous, but he likes the lack of pressure, and being out driving round the countryside. Recently though odd things have begun to happen - Daniel's seeing ghosts, and it seems like many of his customers are too, and although Daniel's girlfriend can help out with a 'witch bottle' to keep phantoms and nightmares at bay, it seems to be just a stop-gap measure. There's also the mystery surrounding the men driving the Fallen Stock vans, ostensibly they're collecting dead animals from the farms for safe disposal, but Daniel feels they're up to something far more sinister.

It's a synopsis that feels full of dread and suspense, but for my taste it took just too long to get round to the creepy bits. The detail about milk rounds and the quirks of the customers would have been all very well in a different sort of book but here they just seemed drawn out, and unnecessary. When the story eventually gets round to Daniel's nightmares, and the ghostly presences appearing all over the neighbourhood, the chill factor cranks up a notch or two, but it was too little, too late for me.