Next month (February 2021) is LGBT history month, and throughout that time author Anne Goodwin is making her first novel Sugar and Snails available free for subscribers to her website. The story is of a woman who has kept her past secret for thirty years following a momentous event which changed the course of her life, and in 2016 the book was short-listed for the Polari First Book prize.

Below is Maryom's review of Sugar and Snails from 2015 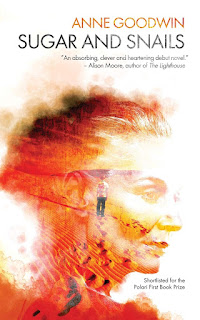 Diana is a forty-something, set-in-her-ways university lecturer; an intensely private person, she lives alone with only a cat for company, and even her closest friend who has known her since their university days isn't aware of the secrets hidden in Diana's past. For thirty years she hasn't told anyone about the momentous event which altered the course of her life completely but now, entering into a new relationship which offers the hope of lasting happiness, that past seems back to haunt her.Sugar and Snails is a portrait of a woman in crisis; at first Diana's actions seem extreme but as I got to know her, and her back-story, I came to understand her reaction. There's a feeling throughout that Diana is as uncomfortable with who she is now in the present day as she was as a child. Her work as an academic psychologist leads her to suspect the decision she made as a teenager was wrong, to think that maybe, at fifteen, she was too impulsive and ill-informed, and that her actions haven't really led to a happier life. Now Diana has a chance of happiness, but to grab it she needs to step out of her comfort zone and face down her fears. Advised as a teenager to forget about the past, and 'put it behind her', that was exactly what she did but, never truly happy and always frightened that someone would find out, she's put much of her life on hold for 30 years; relationships, as such, have failed and, rather than risk change and scrutiny, she's stayed in one job settling for the familiar but unchallenging and dull.So, what was the traumatic event 30 years ago? It's kept a secret for much of the book but I'd spotted an accidental reveal in the publishers media-pack. Now this isn't the ideal way to approach a story - it's always nice to have the big reveal sprung upon you the first time through, whether it's the plot twist in Bruce Willis' film The Sixth Sense or not knowing whether Elizabeth and Darcy will get together in the end. Knowing before hand loses some of the tension and build up, but both books and films have to stand up to a second read/viewing and I find myself in the curious place of having read Sugar and Snails once but being able to say that it's a re-readable story; that it doesn't just rely on that one surprise element. Through the flashbacks to Diana's increasingly troubled childhood and adolescence, I could stand back a little and appreciate how the author had cleverly built up hints at what is to come without actually giving anything away, while still being immersed in the unfolding of Diana's life.This is the story of one specific person and her problem, but it raises a lot of wider issues from gender identity and stereotyping, and the way society forces us to conform, to how impetuous decisions made when young can affect our whole lives. Although she's written many short stories, this is Anne Goodwin's debut novel - I hope to read many more by her.
Posted by maryom at 17:51