The Shape of Darkness by Laura Purcell 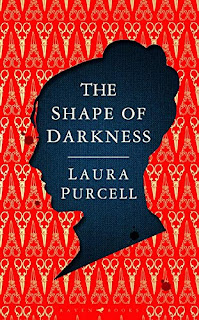 Agnes Darken is a silhouette artist, with paper and scissors summoning up a person's likeness. In Bath's heyday it was a profitable occupation but now, like the city itself, it's fallen out of favour, and Agnes struggles to make enough income to support herself, her elderly mother, and orphaned nephew. Then, one of her clients is murdered shortly after posing for a portrait. Then another ... and another ...

Trying to make sense of these events, Agnes decides to contact those who've died through a medium - a young girl, Pearl, who's managed and manipulated by her older half-sister - but instead of clarifying anything, Agnes and Pearl manage to raise troubled spirits out for revenge.

Part ghost story, part whodunit, The Shape of Darkness is gripping and enthralling; a book I didn't want to put down.

I loved the depiction of Bath; shabby and down at heel, full of memories of better times when visitors flocked there to 'take the waters', but by the mid-1800s no longer popular with the leisured upper classes. Agnes' fortunes have mirrored those of the city. Her hopes of love and marriage were dashed, and now she's a lonely middle-aged women struggling to get by, and desperately trying to avoid her memories of the past.

Through Pearl and her sister the reader enters the world of professional mediums and mesmerists. As you might expect, it's a world where things are not quite as they seem. Pearl may have some ability to contact the dead, but her sister knows that isn't enough to bring people back time and again, that a certain level of showmanship is required to make a living out of it.

There's a dark, brooding atmosphere throughout, as is fitting for a ghostly thriller. It's a book in which nothing is quite what it seems, and in the best tradition, it has a twist (or more) waiting at the end for the reader.